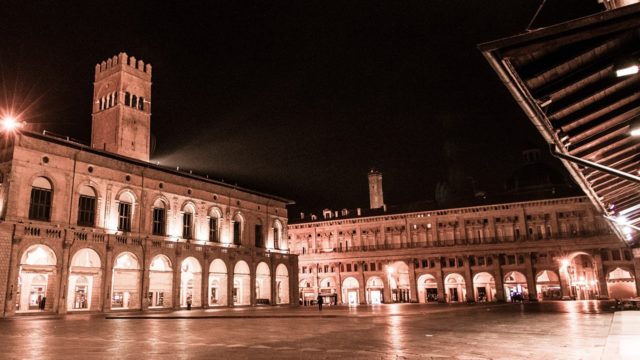 Piazza Maggiore is located in the heart of Bologna and it is the main square of the city. It is surrounded by Medieval and Renaissance buildings, such as D’Accursio Palace, where the Municipality is located . There are also Palazzo dei Banchi, Palazzo del Podestà and the Cathedral of San Petronio. The central part of the square is occupied by a pink and white granite platform. It is the so-called “Crescentone”, whose shape reminds the citizens of the “crescentina”, a food typical of Bologna. In 1945, on this elevated paving, the city celebrated its liberation from the Nazi occupation and the end of WW2. In fact, we can still see traces of the passing of military tanks on the eastern side of the Crescentone.

Piazza Maggiore is the most important square in Bologna, the core of the city life, where people walk, children play and buskers sing or play music. Its construction started in the year 1200, when the Municipality of Bologna bought some buildings in the central part of the city and demolished them in order to create a space for public life. For this reason, it can be considered as one of the first real “squares” in Italy after the fall of the Roman Empire, a meeting place where people gathered for public activities.

One square, many purposes

Originally, Piazza Maggiore was created to host the old city market, which was held on Saturdays. Here people would not only sell food, but also fabrics and ropes. Merchants would often try to cheat and make people pay higher prices for their products, so the Municipality of Bologna decided to carve the standard units of measurement on the walls of Palazzo d’Accursio, where they are still visible. This expedient was meant to make these standard units public, in order to discourage frauds. During the Middle Ages, Piazza Maggiore was also the place where criminals were convicted, executed and burned at the stake. Luckily, these are just macabre memories from the past. Today, this square is appreciated for the beauty of its buildings and the joyful people that spend their time here.